City problems are adequately solved
by the experiences and technologies of Japan.
We are here to assist and facilitate this. 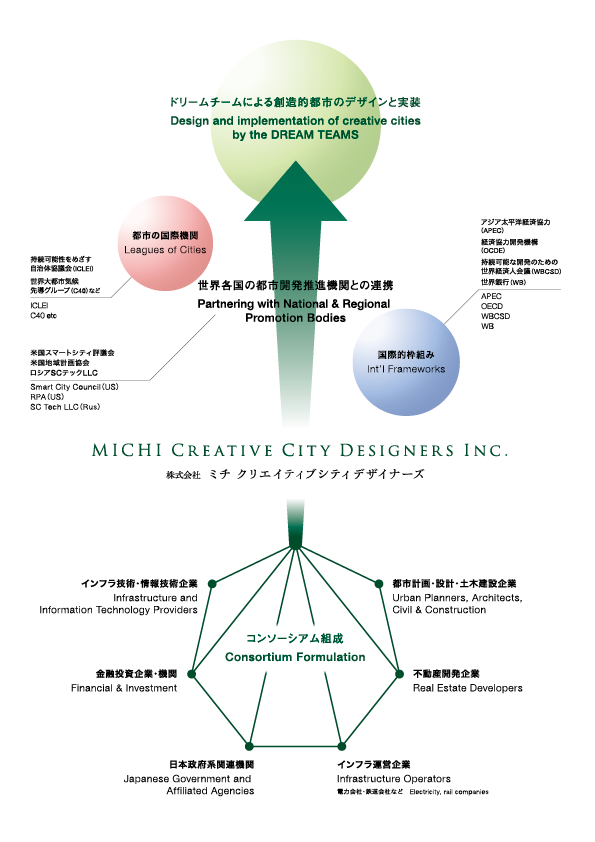 We DISCOVER the new direction at another turning point in the cities’ way of being.

Ever accelerating urbanization and the delay in infrastruc- ture expansion in emerging countries, and ageing of population in advanced countries are some of the issues the cities in the world are facing. Further, the prevention of global warming pushes the cities towards the reduction of greenhouse gas emission as an external pressure. Although diverse words and concepts such as “Smart City”, “Eco-City”, and “Green City” have been advocated, the real solutions have yet to be pursued.
Now is the time to rethink the direction, leaving simply “Low Carbon” and simply “Eco-Friendly” behind and towards the directions where the cities must take for them to really obtain their competitiveness and creativeness as the firm foundation of sustainable growth.

We PRODUCE the best casting of wisdom players for diverse stages of cities.

Japan as the “Top Runner of Problems” is full of wisdom, which even the people living there do not recognize its value, to solve the urban issues of the world associated with the sustainable growth both in emerging and industrialized countries.
Michi Creative City Designers Inc. was established to COLLECT WISDOM of Japan, INTEGRATE it with that of the world, FORM A DREAM TEAM of players with social, financial, environmental and technological solutions, and SOLVE THE PROBLEM TOGETHER.

We LINK the wisdoms and experiences, PARTICIPATE in solving, LEAD the team, and SOLVE the issues in the best way.

Michi Creative City Designers Inc. goes beyond simple networking and consultation onto the composition of consortia, bids on tenders, and offers the series of process of linking the people, participating in solving the issues, leading the projects, and bringing the best way of being into reality as a ONE-STOP SERVICE. The company’s network reaches central and local governments both at home and abroad, international organizations, international leagues of cities and mayors, planners associations of many countries, and industrial federations acting beyond borders, which forms the core VALUE of the company.